The 2° Brain Stimulation Conference is officially over and we are trying to put ideas and feelings together about the event.

We are pretty satisfied about the outcome of the first symposium organized by our Neurostimulab. Lots of people attended and speakers were great!

Brita Fritsch presented some new data on the effect of DCS on functional and structural plasticity in animals and Javier Cudeiro compared data from magnetic fields TMS and tSMS on the visual cortico-thalamic network.

Leonor showed two of our TMS-EEG studies that aimed to track the effect of tDCS on cortical plasticity in rest vs task condition and Charlotte Stagg closed the symposium by showing us some results of the role of  inhibition in motor performance and learning investigated by combining non-invasive brain stimulation and fMRI.

Also the poster I presented about tDCS improving sentence’s comprehension was well welcomed and received positive critics by researcher involved in language and brain stimulation.

Location and hospitality were great, however we felt the unusual feeling that something was missing. Women at first. We have such great female researchers in our field that were completely absent from both  invited speakers and symposia presenters.

Secondly, despite the affluence was impressive, some of the most important research groups did not attend to the conference.

Third missing thing are new faces. The same speakers presented plenary lessons and sessions during symposia. Different topics? Not at all. Fourth and last of our personal missing list: new topics. We left Göttingen with so many methodological issues and open questions that could be deepened during this event. Instead, the level of plenary sessions was really basic for an audience already expert on the field.

It is not all lost for the BSC. Poster session was really good, with some young researchers who are trying to do new and interesting projects. The symposium about accelerated rTMS was really interesting and put lights on a possible better way to improve rehabilitation and antidepressant protocols.

A special mention for Tony Barker who entertained us by showing that TMS can be cool enough to attract the attention of Doctor House and his crew (although they used the technique in a really bizarre way)!

Our trip in Barcelona is sadly over, but stay tuned and follow our new adventures! 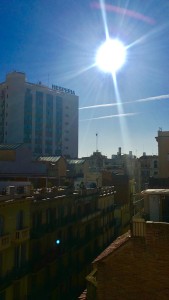 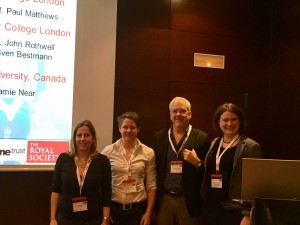 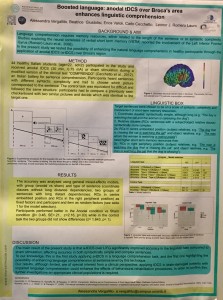 Alessandra’s Poster. Check out for our layout in next conferences!